Gulls swoop and wheel in the air, screeching loudly. Two men grunt as they pull in a large net from the water. Slimy fish flop frantically inside the mesh, sides heaving and scales glinting. One of the men looks up for a moment to watch the gulls. He sucks in a deep breath of the tangy sea air before saying, “Good catch today.”

The men’s faces are covered with thick, black beards. Their leathery skin is red from the sting of the wind and waves. Although they are young, constant exposure to the elements has aged them prematurely. They are wild and unkempt. Even their speech is wild, having grown up among other fishermen. They stink. They smell like sweat and seaweed and dead fish.

Jesus sees them as He is walking along the beach one day. He must notice their almost frightening appearance. He must smell the stench of fish and sweat that clings to their clothing. But He also sees something much more important.

He sees their potential. So He tells them to follow Him.

And, without hesitation, they drop everything. 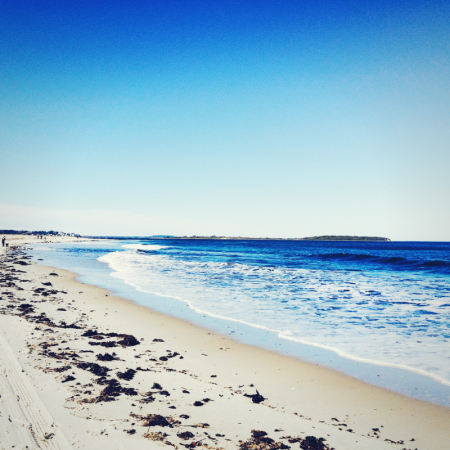 I doubt that anyone who knew these men pictured them turning the world upside-down. I doubt that their family and friends imagined that their lives and words would still touch people thousands of years later. But spending time with Jesus has a way of changing people.

I used to think that God had a plan for everybody except me. I’m a stay-at-home mom with three children. I’m not beautiful. I’m not well-spoken. I don’t have a glamorous job. I don’t move in elite circles. Often, as I sit here and write, I have a child sitting on my lap. Sometimes I have two. Life is a juggling act in which I feel like I constantly have to chase after the balls I’ve dropped.

But Jesus sees beyond all that. He sees potential. And spending time with Him is changing me. I’ve come to realize that, incredibly, He wants to use my life to touch others. Right where I’m at.

He wants to use you too. Maybe you’ve had harsh words spoken over you all your life. People have told you that you will never amount to anything. Deep down, you think they’re right. But Jesus says that you have worth. He gave His life so that you could know Him. You are so precious in His sight!

Maybe you don’t think that you are much to look at. You don’t feel beautiful. You don’t have the right clothes or the right figure. You know what? Jesus carefully and thoughtfully formed you in your mother’s womb. When He looks at you, His breath catches in His throat because you are so beautiful to Him.

Maybe you aren’t well-spoken. Did you know that Moses had a speech impediment? He stuttered. And yet God called him to speak to the pharaoh of Egypt and to lead thousands upon thousands of people out of slavery. God wants to use you too.

God calls unlikely people because His transforming love shines the brightest through the humble, the weak, and the broken. It doesn’t matter what you’ve come out of. Jesus can heal you, make you whole, and make you useful to His kingdom.

So let’s get rid of the mindset that says, “I can’t!” It doesn’t matter. What matters is that He can. You see your weaknesses. But Jesus sees something much more important. He sees your potential. And He is calling you to follow Him.

What will your response be?