From the fertile Nile valley to the shifting desert sands, Egypt is a land rich with history. This week, my girls and I took a trip to this northern part of Africa – right in our own living room. We read stories, did crafts, studied photos and learned all about ancient Egyptian culture and modern Egyptian life.

We started off by borrowing a stack of books from the library to add to our morning basket.

I also purchased Ancient Egypt Photo Activity Cards and pulled out our Kingfisher History Encyclopedia. Each morning, we spent some time looking through our books and photos and talking about the images.

We also talked a lot about Moses and how he was adopted by an Egyptian princess. The Moses and Miriam craft came from DLTK and the girls absolutely loved it.

(Note: I printed off the template in a smaller size and used a cupcake liner rather than a coffee filter so that we could fit the craft on our project board.)

The girls loved the idea of an Egyptian princess and were even more excited to dress the part. I made a fancy headband out of materials around the house and grabbed an old necklace that looked sort of Egyptian-ish. Then I pulled out some of my make-up and went to work transforming them into “ancient Egyptian” princesses. They were beyond excited. 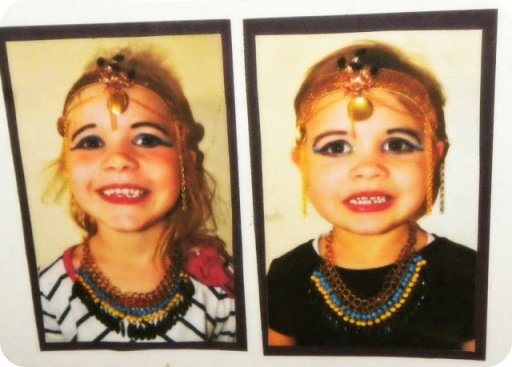 I picked up an Ancient Egypt Safari Toob at Michael’s so that we would have some tactile visuals. There are some plastic replicas of gods/goddesses included. I just wasn’t comfortable keeping them around, despite the fact that they have no meaning to us whatsoever. So we got rid of them and had a really great discussion about Moses, the Israelites, the golden calf, the Ten Commandments and how important it is to worship God alone.

I also found a mini sandbox and kinetic sand as well – perfect for recreating desert scenes. The girls spent hours playing with this. 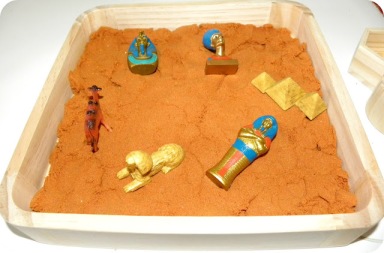 We read from two missionary biographies this week. The first is called Mama Maggie. It’s adult nonfiction, so I only read a few snippets. In it, however, the background story of Cave Church (in Cairo) is told. After reading the story, we watched a video of thousands of Egyptians worshiping there. It is so powerful.

We are also working through the biography of Lillian Trasher, who set up the very first orphanage in Egypt in the early 1900s. This particular biography is part of the Christian Heroes Then and Now series, published by YWAM. My girls are enthralled by these stories of faith.

This movable figure came from Famous Figures of Ancient Times. We’re looking forward to using that book alongside Mystery of History next year. However, since Thursday was a rainy day and three of us were under the weather, we pulled it out a little early. Assembling this pharaoh was a fun and easy craft to pass some time.

Sandpaper pyramids were also fun and easy. I snagged some of my husband’s fine grit sandpaper and had the girls cut out triangles for our display board.

I innovated a little bit for our Egyptian snack. 🙂 Since they grow figs in Egypt, we purchased Fig Newtons. I didn’t know where to get Egyptian baklava so we purchased the Greek version, which is a little bit different. Also, since the ancient Egyptians grew grapes, we included those as well.

Last but not least, we wrote our names in hieroglyphics, using a library book as a guide.

One other thing that we did (not shown) was a little study on camels. At the end of our Egypt unit, I did put a photo of a camel on our display board and typed out some “camel facts”, as told to me by my daughters. They remembered the information surprisingly well. 🙂

As we put together our display board, my oldest daughter said, “Mom, this is my favourite project that we’ve ever done!” Her words made my heart happy.

I love project-based learning. And I love my children’s eagerness to learn.

Follow The Grace-Filled Life on WordPress.com
Join 950 other subscribers