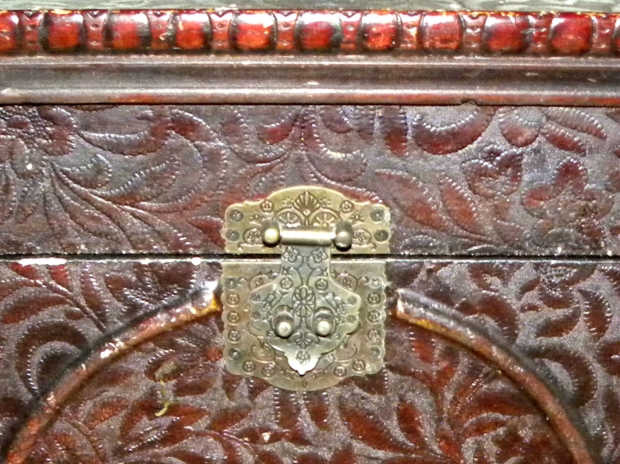 There’s a chest in the living room. It’s fairly small and a bit scratched and dented. On its top sits a beige table lamp and, sometimes, some coasters. Most visitors probably don’t even notice it.

But it has a special story.

Years ago, in the early part of my mid-twenties, I became friends with a young man at work. He was tall, dark, handsome, smart and sweet—I tried hard to keep my distance, but I don’t think I’ve ever prayed quite so hard for someone’s salvation. One day, he came to church with me and asked Jesus into his heart.

One Christmas, this young man gave me a chest. Inside were various objects. There was a piece of quartz, a bag of sand, a rock, some crayons—all strange and seemingly unrelated. But all very special. They were mementos of various places we’d been together.

The quartz was from a festival we went to with friends. He had carried it in his backpack for months.

The sand was from a trip to the beach half a year prior, when his grandfather was in the hospital.

The crayons were from the first restaurant we ever went to together.

There were other things too. Each with a specific memory attached and each very special.

Time passed and we added a few more things. Like this, from the night that he got saved – because, even though we didn’t start dating until a year later, it’s a special story of answered prayers and God’s hand on a young man’s life.

And this, because we both love adventure.

We’re married now and not as young. We have three children, two cars and a creaky, old house in the East end.

With the passage of time, we lost some of our romantic idealism. We don’t always get along and we have battle scars.

But I wouldn’t have it any other way.

You see, romantic idealism doesn’t keep a romance going. It takes hard work—and grace. There were times where we didn’t think we’d make it this far. But we love each other and we’re in this for the long haul. So we do what it takes.

We don’t add too much to the wooden chest these days. It just isn’t possible to save mementos from everything we do together—we do all of life together.

It’s interesting how love changes as you do life together. I make sure that supper is waiting when he gets home and that the house is tidy. He does the dinner dishes and puts the kids to bed.

We still have fun. We laugh a lot. We go on dates. We tease each other.

Every now and then, I creak open that small wood-scarred chest and I think about how far we’ve come and how far we have yet to go.

And I’m glad that we chose each other—that God chose us—to walk through life together.

Follow The Grace-Filled Life on WordPress.com
Join 947 other followers